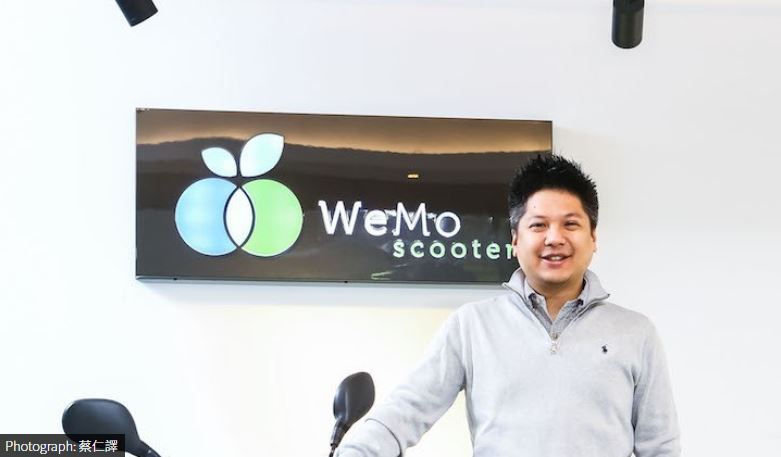 Jeffrey Wu, the founder and CEO of WeMo Scooter, said he created Asia’s first electric scooter sharing company as he thought it would be impossible to force dwellers of Taiwan’s capital to ditch their scooters, even though there are worries about climate change.

Scooters have become an inextricable part of Taiwanese culture as they are cheaper than owning cars and their riders can access any point on crowded roads or parking spaces, Wu said in an interview with Business Next Media.

“I wanted to keep the advantageous and convenient aspects of using scooters while solving problems that they cause, such as air pollution and parking scooters randomly, which give off a really, really bad image in the city where we live,” Wu said.

Over three years ago, Wu founded WeMo Scooter in Taipei to encourage the public to choose shared scooters in a nation that has the highest density of motorcycles and scooters in the world.

According to Ministry of Transportation and Communications statistics, Taiwanese use approximately 14 million scooters.

“The emissions are not only affecting our health, but our planet’s health: from our atmosphere to our oceans and even our soil.

“Awareness of chemicals emitting from our vehicles is the first step to reducing them, since it’s every single citizen’s responsibility to make the environment better and not pass down the shabby environment to our next generation.”

With the Taiwan government set to ban the sale of gas-fueled scooters in 2035, WeMo went into partnership with KYMCO, a major Taiwanese manufacturer of motorcycles, and in 2016 launched shared electric scooters, which so far are only available in Taipei.

Over 100, 000 people have since downloaded WeMo’s app and become members.

“The WeMo Scooter app is the key to helping riders unlock the scooters,” Wu said.

“You don’t have to worry about forgetting the (physical) key. Once you download the app and join in as a member, the app provides a map identifying the scooters nearby and users can click ‘reservation’ to book their scooters,” Wu said.

“After finishing your (ride), you just need to park the scooter at a ‘legal’ open-air parking area, “ Wu said.

The app requires users not to park their scooters randomly, which helps to reduce parking congestion.

After the rider successfully parks the scooter, he or she clicks “return the scooter” and pays online, Wu said.

Wu told Business Next Media that he wants to make transportation a fun thing to do and wants to organize crossover cooperation with different brands, corporations and local governments.

“We have cooperation with ‘Jimmy,’ a famous Taiwanese illustrator, who designs WeMo scooters to attract the young generation,” Wu said.

“We have to put our utmost effort into finding new things through strategic cooperation and partnerships to make transportation a fun thing,” Wu said.

Wu still noted that technology plays the most important role in his business.

“The technology team of WeMo Scooter has been engaging in upgrading our hardware,” Wu said.

Wu, a graduate of New York’s Columbia University, envisions his e-scooter system as a “bedrock” in building a “smart city,” an urban area that uses different types of electronic data collection sensors to supply information, which is used to manage assets and resources efficiently.

Wu, who has also worked for McKinsey and Intel, said he was inspired by speeches made on Columbia’s campus by technology and investment icons such as Bill Gates and Warren Buffet.

“I still remembered well those giants’ wise words and how touched I was by their words, which led me become an entrepreneur who wishes to make something different and to create a social impact,” Wu said.

As such, an environmentally-friendly “smart city” is his vision for the future.

Once the public is broadly in the habit of using shared electric scooters, Wu says he may move into fields involving the collection of air pollution statistics and environmental data.

“Everything involved requires to have a lot of internet-of-things (technologies) to realize this vision, and that’s the next thing I would like to do,” Wu concluded.