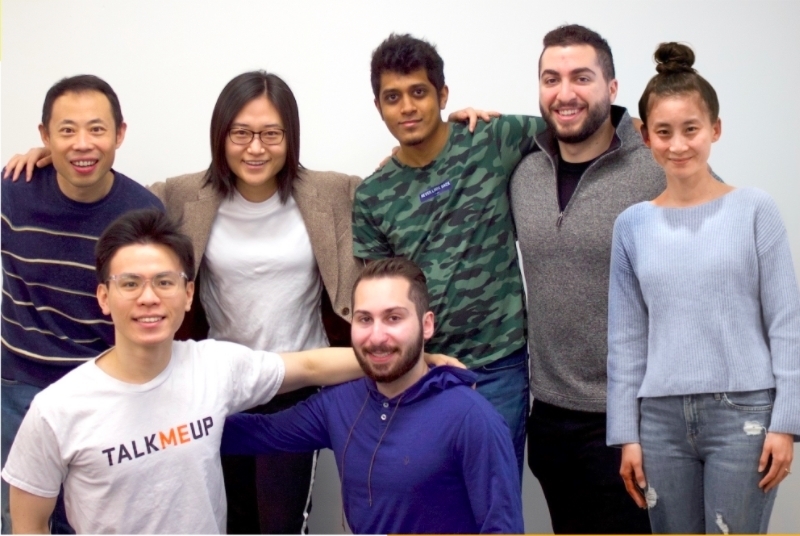 In the fierce competition of a total USD$ 350 billion market cap education business, Pittsburgh-based startup TalkMeUp uses AI technology to get a piece of the pie. Already raising USD 1 million in the pre-seed round, they are aiming for the seed round now.

Walking along Nanyang street in front of Taipei Main Station, one might be dazzled by the wide variety of street signs advertising cram schools. It is a testament to the enthusiasm of the Taiwanese in terms of the education industry.

In fact, education technology is such a sought-after business in Taiwan that many international startups are eager to get a slice of the action. Those who jumped onboard in Taiwan include UK-based edtech startup Lingumi and MEandMINE, an edtech venture from Silicon Valley focusing on social emotional learning and STEAM education. According to HolonIQ, the global market capitalization of online education is forecasted to reach USD $342 billion in 2025.

The edtech business scene is a blue ocean that many prominent figures want to dive into. Among them is TalkMeUp, a customizable AI communication coach that leverages big data that would train you to deliver clear, concise and moving interpersonal communications, including self introductions, sales pitches and product introduction to an important client.

Entrepreneurship spirit burning in the heart of a PKU engineer graduate

TalkMeUp, a smart coach of critical communication based in Pittsburgh, is among the wide array of ed-tech startups seeking to land in Taiwan. TalkMeUp is already gaining traction across the U.S. with several prominent clients such as leading global media giant Hearst.

“Around the globe, the education market amounts to USD 350 billion. However, the market is extremely fragmented. Up to date, the market has not seen any unicorn rise up in the ed-tech scene,” said JJ Xu, the founder of TalkMeUp. Therefore, JJ wanted to leverage AI to scale up and take part in the education startup business.

Prior to her venture in the startup sphere, JJ started out in the scientific field. Boasting a Bachelor’s and Master’s degree in Microelectronics at Peking University, she chose to start her career down the business path due to her interest in realizing ideas in product campaigns. She worked at Groupon and Huawei, excelling as the head of sales in both companies. “I think everyone is uncovering their purpose in life along the way. I’ve found my true passion in business. More aptly put, to start a company on my own is my spark,” said JJ. 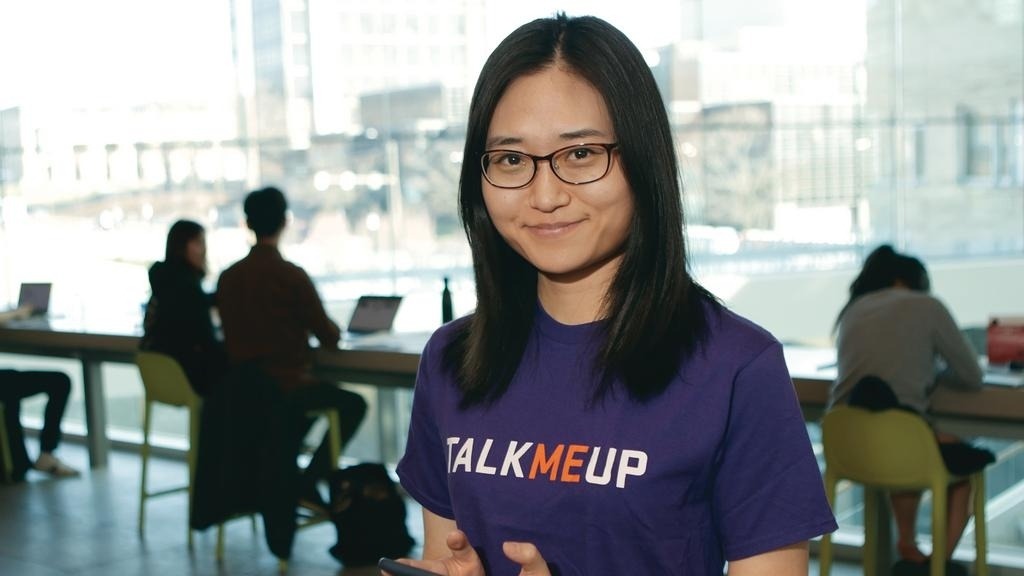 JJ Xu chose to start her career down the business path due to her interest in realizing ideas in product campaigns, excelling as the head of sales in both companies. / Photograph : talkmeup

When asked why she continued down the business road, JJ said, “I set up my first startup in 2012. I failed the first time. This experience led me to the decision of expanding my horizon in big corporations like Groupon and Huawei,” said JJ.

Later, JJ pursued an MBA degree from Tepper School of Business, Carnegie Mellon University. “It got me thinking. What the most invaluable takeaway at MBA school should be,”said JJ Xu. “Most of my peers answered almost in unison, that ‘network resource’ and ‘communication skills’. Wouldn’t it be swell if we could scale and turn this into a business plan,” said JJ Xu. 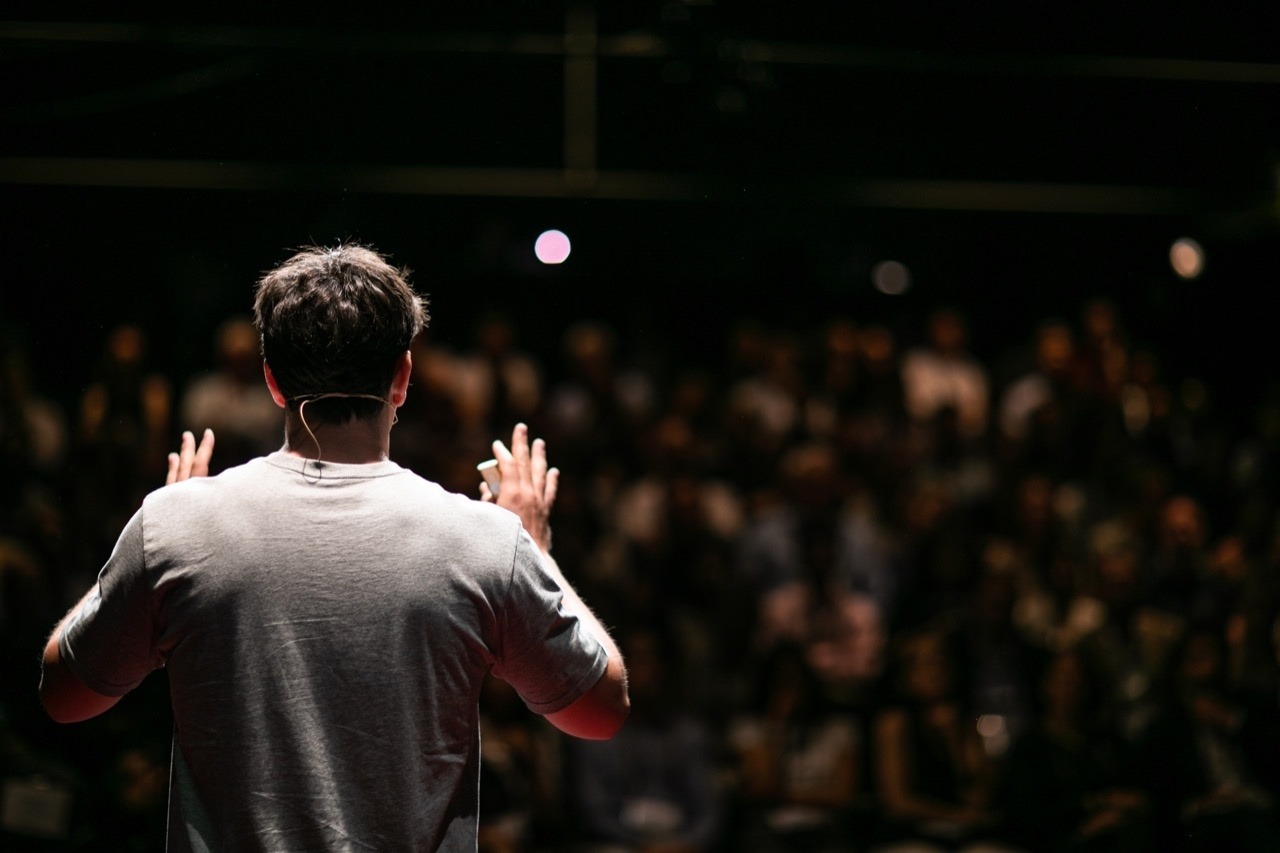 As an MBA graduate herself, JJ considered "communication skills" to be most valuable in terms of an MBA student. She aimed to scale "speech education" into an online education platform. / Photograph : Shutterstock

Skill up and scale up

As far as employee communication training goes, the traditional method is less than satisfactory. “Many companies hire communication experts. They do best in offering ‘qualitative analysis’,” observed JJ. Simply put, human experts can point out speaking problems you might have, end of story. Therefore, human-made suggestions fail to let you know the exact extent to which you should improve. 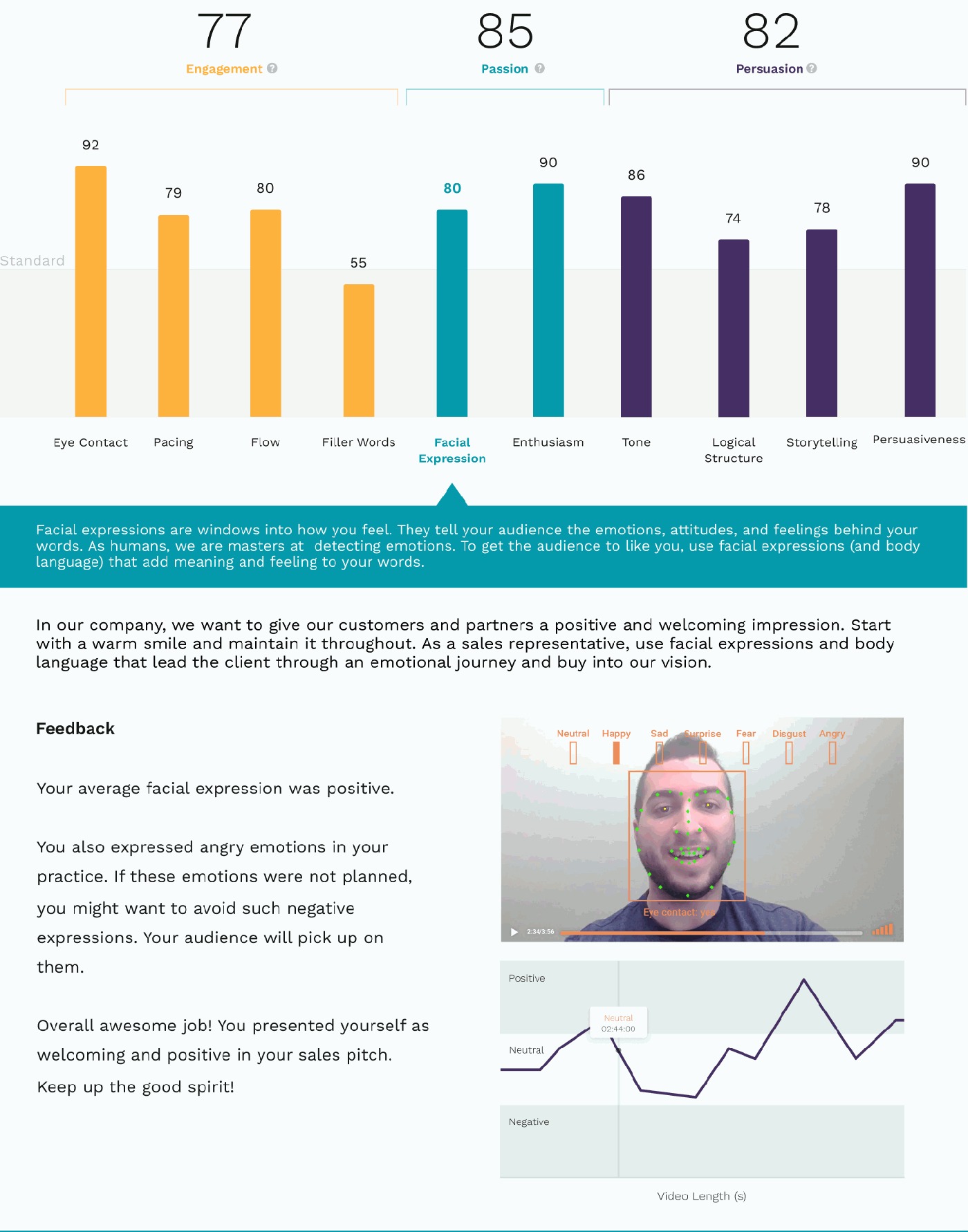 Similar to attending a zoom meeting, users talk into a camera. Almost simultaneously, AI-powered feedback is generated based on 16 metrics, which include passion, engagement, eye contact, logical structure and a few more. / Photograph : talkmeup


TalkMeUp’s interactive AI system received a patent in May 2021. It makes use of a vast ocean of video data, including TED Talks, speeches given by MBA alumni, and other selected online resources. Via a module, morphology and speech features are transformed into a performance vector, which then generates a rubric that helps users identify facets they need to work on their speech delivery.

Speech performance analysis and feedback is completed with ease on TalkMeUp’s online platform. Similar to attending a zoom meeting, users talk into a camera. Almost simultaneously, AI-powered feedback is generated based on 16 metrics, which include passion, engagement, eye contact, logical structure and a few more.

For example, when a speaker says “It’s my pleasure to attend this meeting”. He or she might fall short of presenting a cheerful tone or happy face expression. To check for consistency with high-level metrics such as emotions, NLP trained video and audio analyzer steps in to help with the identification. 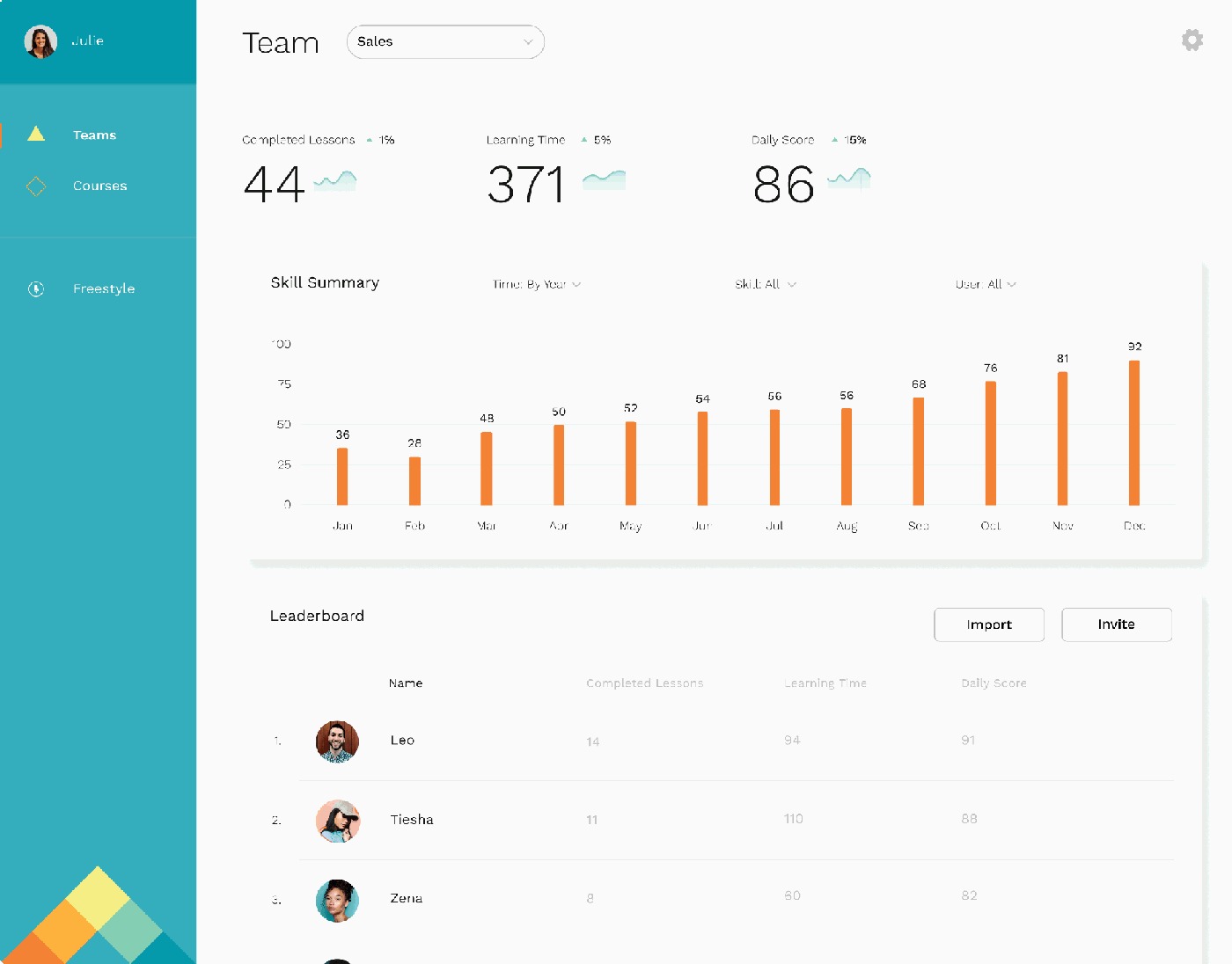 Furthermore, customizable solutions are also an emphasis of TalkMeUp. Firstly, open API would allow TalkMeUp’s patented video analyzer to be integrated with preexisting learning platforms, such as that of Coursera or Udemy. “For users of the platform, they are empowered with a brand new way to practice speech,” said JJ.

Apart from open APIs, the metrics used to analyze communication performance will be altered according to the purpose of one’s speech. Elements that make a speech successful are entirely different between a school teacher and a sales person. “Bearing these differences in mind, customizing performance metrics is critical in the sense that communications want to raise awareness on different topics,” said JJ.

Currently, TalkMeUp adopts a tiered pricing strategy. Aside from depositing a lump sum fee upon subscription, additional charges are made when the user base continues to grow within the client company.

Determined to make it work

In Meet Global’s exclusive interview, JJ walked us through some difficulties she faced in entrepreneurship. “As a newcomer to the U.S., networks needed to be expanded so that business can run more smoothly,” said JJ. She constantly needs to bond with investors, other startup founders and potential work talent for the company.

Furthermore, she said the pressure also came from whether she was able to obtain a work visa. “I was under such immense pressure that a few silver strands of hair started to grow,” said JJ.

Finally, she received an O-1 visa for individuals with extraordinary ability or achievement. Taking a load off her mind, JJ said it’s still a long way to go before TalkMeUp hits success. “Regardless of raging storms in the path towards success, I will stand firm and carry on with my startup project,” said JJ firmly.

“We’re working hard to build a future in which everyone can access learning resources with no limitation and uncap their true potentials,” said JJ ambitiously.

The team is also seeing potential in other language markets. TalkMeUp salesperson learned from customer feedback that language portfolio is expected to be expanded. “Driven by the market demand, we are laying out plans to deliver services in Mandarin, French and Russian,” said JJ.

“Taiwan is one of our target markets. Before the pandemic, we had been keeping in touch with one of Taiwan’s leading online English tutor platforms,” said JJ. The popularity that English tutoring has received in Taiwan makes it an attractive destination for ed-tech startups like TalkMeUp.

Adding Mandarin services to its language portfolio is expected to expand its customer base and bring in more revenue. Having raised USD 1 million in the pre-seed round, TalkMeUp is preparing for seed round funding on the horizon.